The store will not work correctly in the case when cookies are disabled.

We use cookies to improve our site and your shopping experience.

Find out more about the data we collect.

The Lawrence business was established in 1859, according to its 1967 trade catalogue. It was first listed in London directories in 1863, appearing thereafter as an engravers' box block maker or as a boxwood preparer, in 1895 as manufacturers of engravers' boxwood blocks and of wood letters, in 1901 additionally as manufacturers of fine art electrotypes, and in 1911 as a maker of engravers' boxwood blocks, printers' wood type, lithographic scrapers, etc. The business owns catalogues going back to 1925 and some other archival material. Today, the business supplies a wide range of artists' materials.

Thomas John Lawrence (1809-80) was apparently born in July 1809 and christened the following month at St Leonard Shoreditch, the son of George and Mary Lawrence. As Thomas John Lawrence, cabinetmaker, he married Mary Robinson on 27th December 1837, when his father George Lawrence, was described as a carpenter (marriage certificate, kindly communicated by David Lawrence). Their eldest son, George Robinson Lawrence (1839-1903), was born in the Clerkenwell district in 1839. In the 1841 census Thomas John Lawrence was listed in Noble Street, Amwell, Clerkenwell, as a 'frame m.' (i.e., framemaker), age 32, born Middlesex, with his wife Mary and two sons George, age 2, and Thomas, age 1. He traded as a hand mirror and dressing glass maker from 4 Half Moon Crescent in Islington from about 1854, and then from 29 Half Moon Crescent by 1874, where he died in December 1880, age 71, described as a hand mirror maker, leaving a personal estate worth under £300, with probate granted to his wife Mary.

It was his son Thomas John Lawrence Jnr (1840-1887), who set up the business making boxwood blocks. He was born in 1840 in the Clerkenwell district and married Alice Neal in 1865 in the Islington district. In censuses, he can be found in 1871 at 45 Gloucester Road, Upper Holloway, as an engravers' block maker, born Clerkenwell, employing 3 men and a boy, with his wife Alice, daughter Alice and a year-old son Thomas N., and in 1881 at Monken Hadley , Barnet, as an engraver, wood etc, with his wife and ten children between 5 months and 14 years. Thomas John Lawrence, engraver, boxwood block manufacturer and wood letter manufacturer of 17 West Harding Street and Clifford House, Hadley, Barnet, was made bankrupt in 1886 (London Gazette 25 June 1886, 16 July 1889). He died in 1887, age 46, as late of 15 Gloucester Road, Seven Sisters Road, leaving a modest estate of £12.10s, with administration granted to his wife Alice.

Thomas Neal Lawrence was born in 1869 in the Islington district and married Kate Evans there in 1897. In census records, he can be found in 1891, age 21, living in Highbury with his widowed mother Alice, described as a boxwood block maker, as was his younger brother William, age 19. In 1901 he was in Stoke Newington, a boxwood block maker, with his wife Kate and son Stanley, age 6 months, and in 1911 in Finsbury Park as an engravers' block manufacturer, with his family. He died, age 74, in Hornsley in 1944, described as an engravers' boxwood block manufacturers agent.

In the three following generations, Thomas Neal Lawrence's son, Stanley Thomas Evans Lawrence (1900-87), joined the family business in 1917, as in turn did his grandson David Lawrence (b.1927), and then from 1984 his great-grandson, Martin Lawrence (b.1958) (Information from Martin Lawrence, July 2009)

Stanley Lawrence was active in the business for almost 69 years, from 1917 until 1986, becoming sole proprietor in 1941, with an exceptional knowledge of handmade papers and of wood engraving materials. He was a force to be reckoned with, and a master of his subject with a formidable reputation and a man who did not suffer fools or novices gladly, as is apparent from Tales from Bleeding Heart Yard: stories about Stanley Lawrence. When Stanley Lawrence celebrated his 80th birthday, a fine volume was published in his honour by his grandson, Simon Lawrence: 'His great knowledge and superb craftmanship have made it possible for engravers to practice their own skills'. The volume includes boxwood engravings by David Gentleman, Joan Hassall, Gertrude Hermes, Blair Hughes-Stanton, John Lawrence, George Mackley and Reynolds Stone (Simon Lawrence, S.T.E. Lawrence Boxwood Blockmaker: Wood Engravings Collected in Honour of His Eightieth Birthday, Fleece Press, Wakefield, 1980). Stanley Lawrence was the subject of an illustrated profile in Crafts magazine in 1983, featuring the production of boxwood blocks (Montague Shaw, 'Master Blockmaker', Crafts, no.60, January 1983, p.22-5).

Subsequently, a memorial volume of exceptional quality was produced, Tales from Bleeding Heart Yard: stories about Stanley Lawrence (see sources below). John O'Connor described visiting the business in Red Lion Passage with an introduction from Eric Ravilious in 1935: 'I climbed the rickety stairs....The room was small, with a counter down the centre, a bookcase of tempting box and pear wood blocks, and shelves of inks, engraving tools, folders and leather pads on the right. Kept out of sight were the beautiful Japanese papers....I brought a spitsticker, scorper and chisel'. The volume included memories and tributes from Kay Bald (in the form of a letter to Thomas Lawrence in 1939), Edward Bawden (who first brought printing materials and drawing papers from the business in 1925) Ralph Beedham, Diana Bloomfield, John DePol, David Esslemont, Peter Forster, Anne Jope, Phillida Gili (daughter of Reynolds Stone), Simon King, John Lawrence, Simon Lawrence (who worked for his grandfather Stanley Lawrence in 1981, Lionel Lindsay, Miriam Macgregor, George Macklay, Barry Moser (who purchased unjoined blocks and gravers), John O'Connor (see above), Hilary Paynter (who recalls Michael Rothenstein being turned away by Lawrence), Monica Poole, John Randle, Stephen Saxe, Montagu Shaw, Ralph Steadman (who brought etching needles, holders and gelatine rollers), Ian Stevens and George Szirtes.

The business now advertises on its website, as at April 2011, as 'Lawrence Art Supplies, the UK's premier supplier of artists' materials', still featuring printmaking materials as well as general art supplies.

*indicates note applied by the company

Tales from Bleeding Heart Yard was written and published by Simon Lawrence, one of Stanley's five grandchildren and cousin to Martin Lawrence (current director of TN Lawrence & Son Ltd.), for Stanley's 80th birthday.

"the uncertainties of dealing with him made for a name recognised far and wide for probably the wrong reasons." (p5)

"For an actual visit it is a wise precaution to be accompanied by a handsome woman." (p 28)

"He fostered many engravers, both young and old (but especially the young and female), who got used to, and came to laugh at, that handwritten notice next to the bookshelves:

T.N. Lawrence & Son Ltd is currently run by seventh generation Lawrence, Martin. Martin came into the business in 1984 and worked alongside his grandfather Stanley. From 1987 the mail order office was based in Lewes, Sussex until 1998 when it moved to the new Hove shop.

In 2001, high rents forced the Clerkenwell Road, London, shop to close, ending 142 years in the city of London.

Martin has developed the business and brought it into the modern era. T.N. Lawrence mainly trades via mail order and has a shop in Portland Road, Hove, East Sussex (see contact us for details) which was acquired in 1998. We have taken part in several exhibitions during the years including Art in Action in Oxford, Impact Printmaking Conference and The Education Show in Birmingham.

Our warehouse moved from Redruth in 2009 and is now in Kingsthorpe Road, Hove, a couple of minutes away from our shop. 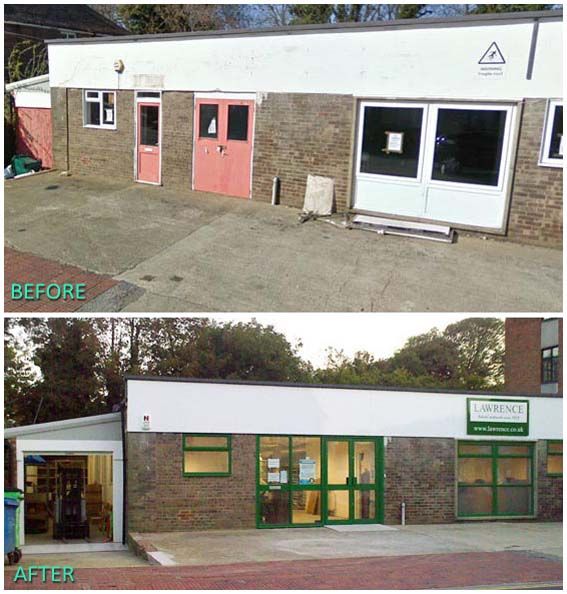 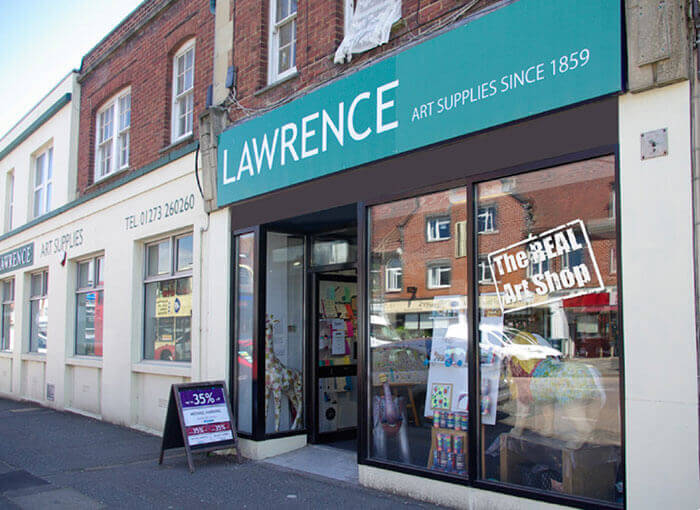 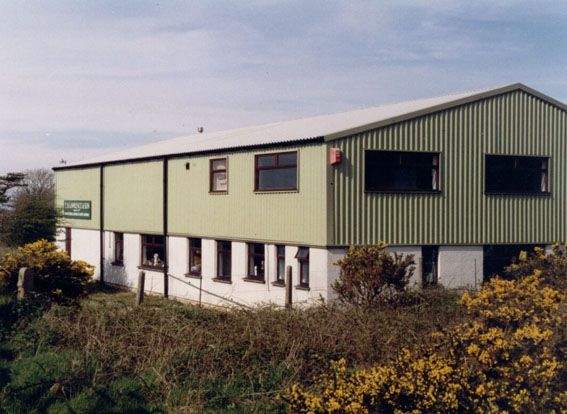 Martin acquired a warehouse with
a small shop in Redruth, Cornwall in 1989. 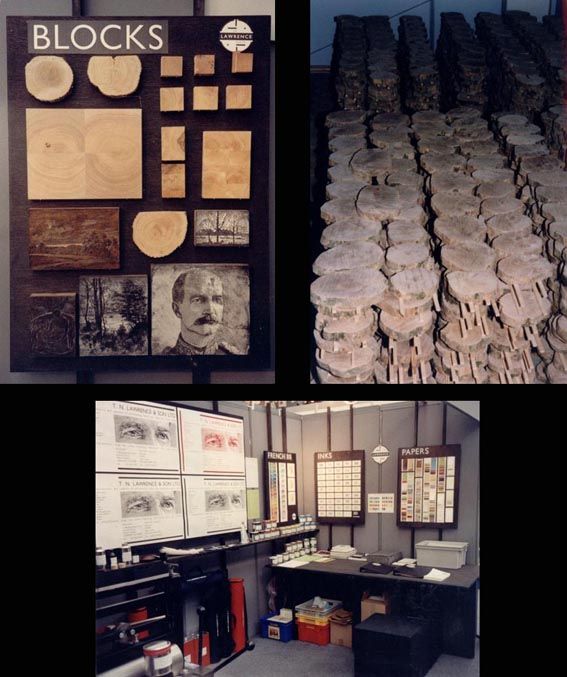 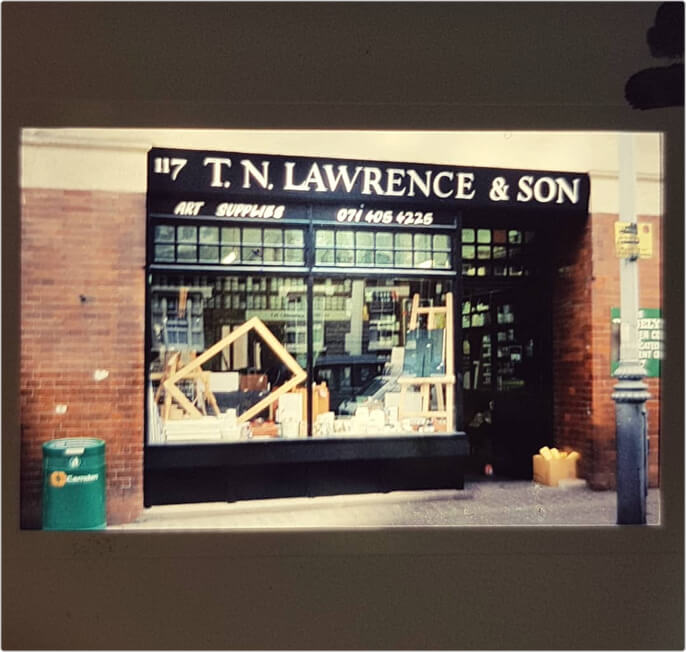 Our shop at Clerkenwell Road, London

Our catalogues through the ages 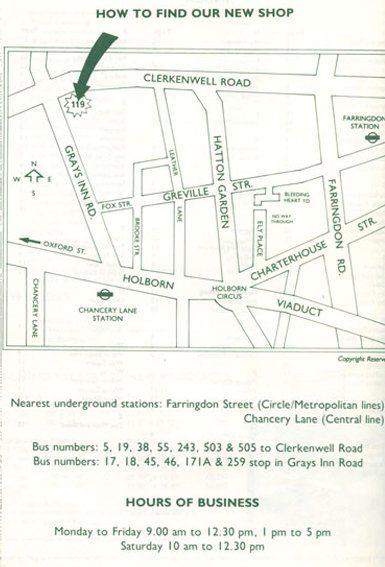 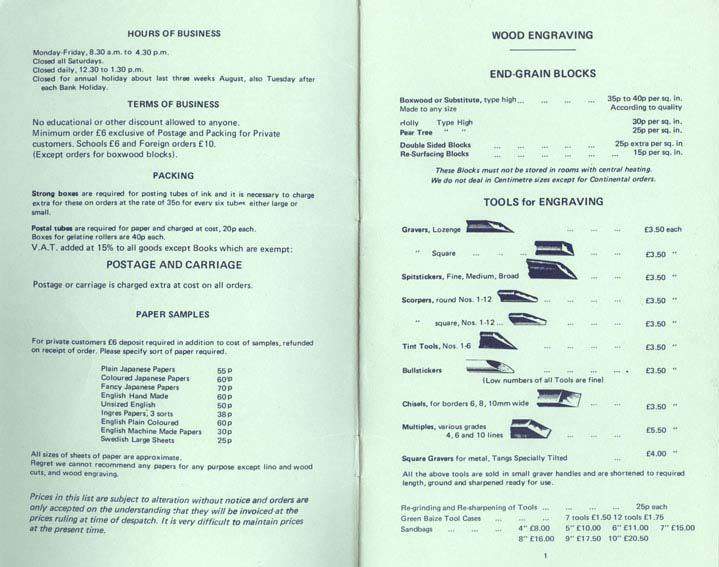 We'll make sure you'll be the first to hear about: